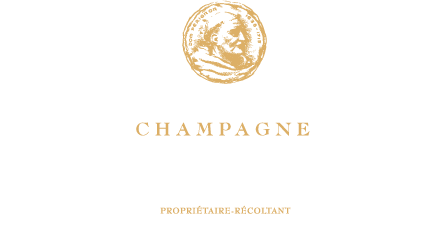 A family know-how for 5 generations 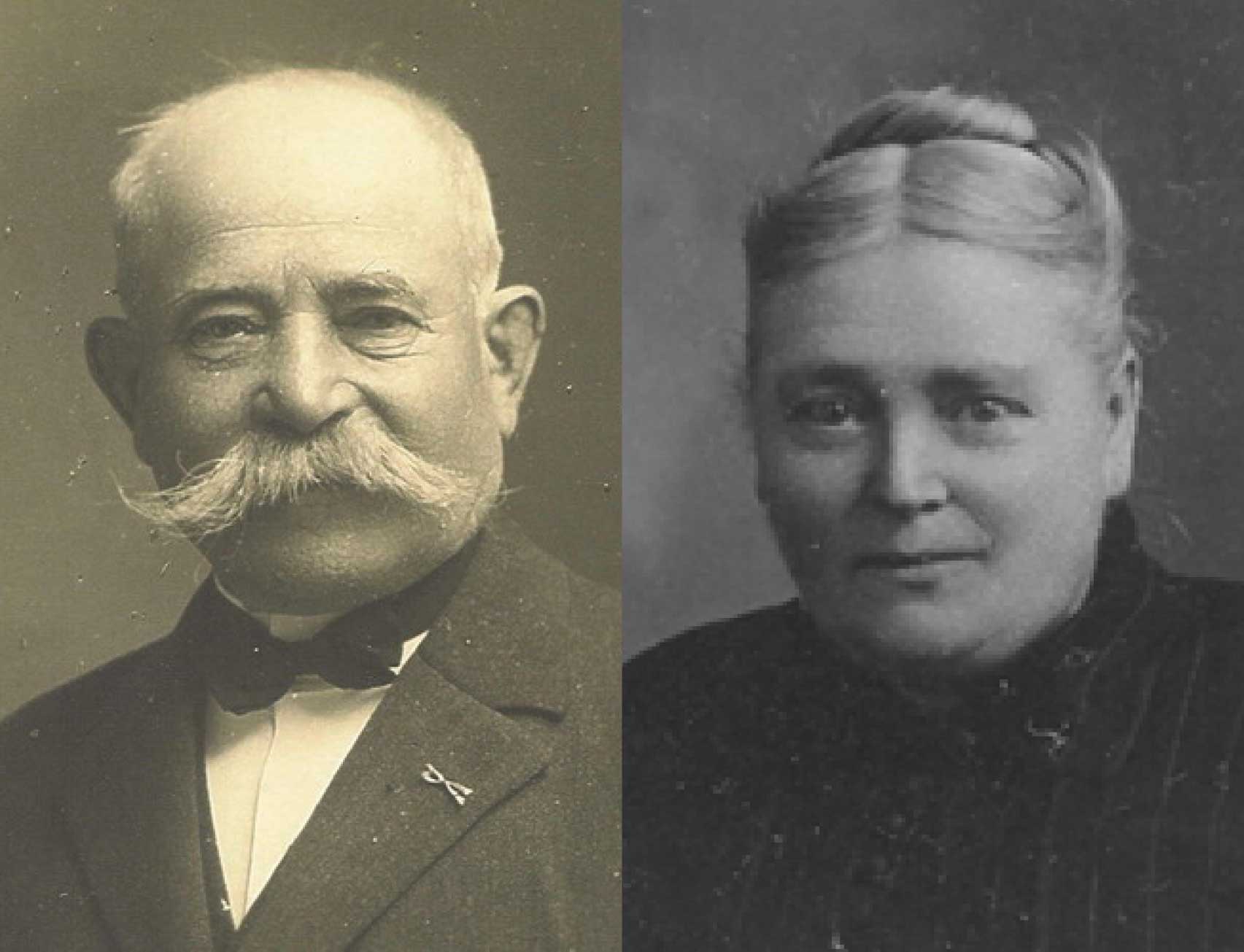 At the beginning of the 20th century, Emile et Aline Dutarque ran a family vineyard in the village of Hautvillers, the cradle of Champagne.

The year 1911 will mark a turning point for Champagne but also for my family.
Indeed, faced with the revolt of the Champagne winegrowers in 1911, the government called in the army.
My great-grandfather Pierre Bosser, then sergeant of the 94th infantry regiment of Bar le Duc but a native of Plozévet in Brittany, arrived in Champagne and was stationed with his regiment in the château of Comte Chandon of Hautvillers.
Every Sunday morning, Sergeant Pierre Bosser went to mass and sang in the village church where he noticed Suzanne, the young woman playing the organ. It was “love at first sight”!

Arriving at the beginning of 1911, Pierre Bosser married Suzanne Dutarque, daughter of Hautvillers winegrowers, in November of the same year!
Happy to marry a soldier (marriage to a winegrower was not an envied fate at that time), the young bride knew that it was her brother Jean who would take over the family business. However, the First World War changed this course, as her brother was killed in the trenches in 1917.
The young woman’s father, Auguste Dutarque, continued to run the family wineyards, but in November 1932, he died in three days from tetanus. It was a tragedy for the family.
Pierre Bosser then decided to take over the winery. He grew the vines, sold what grapes were needed to keep the business going the following year and stored the rest in the cellar.
The first bottling in the name of Pierre Bosser-Dutarque dates back to 1933 (around 800 bottles). 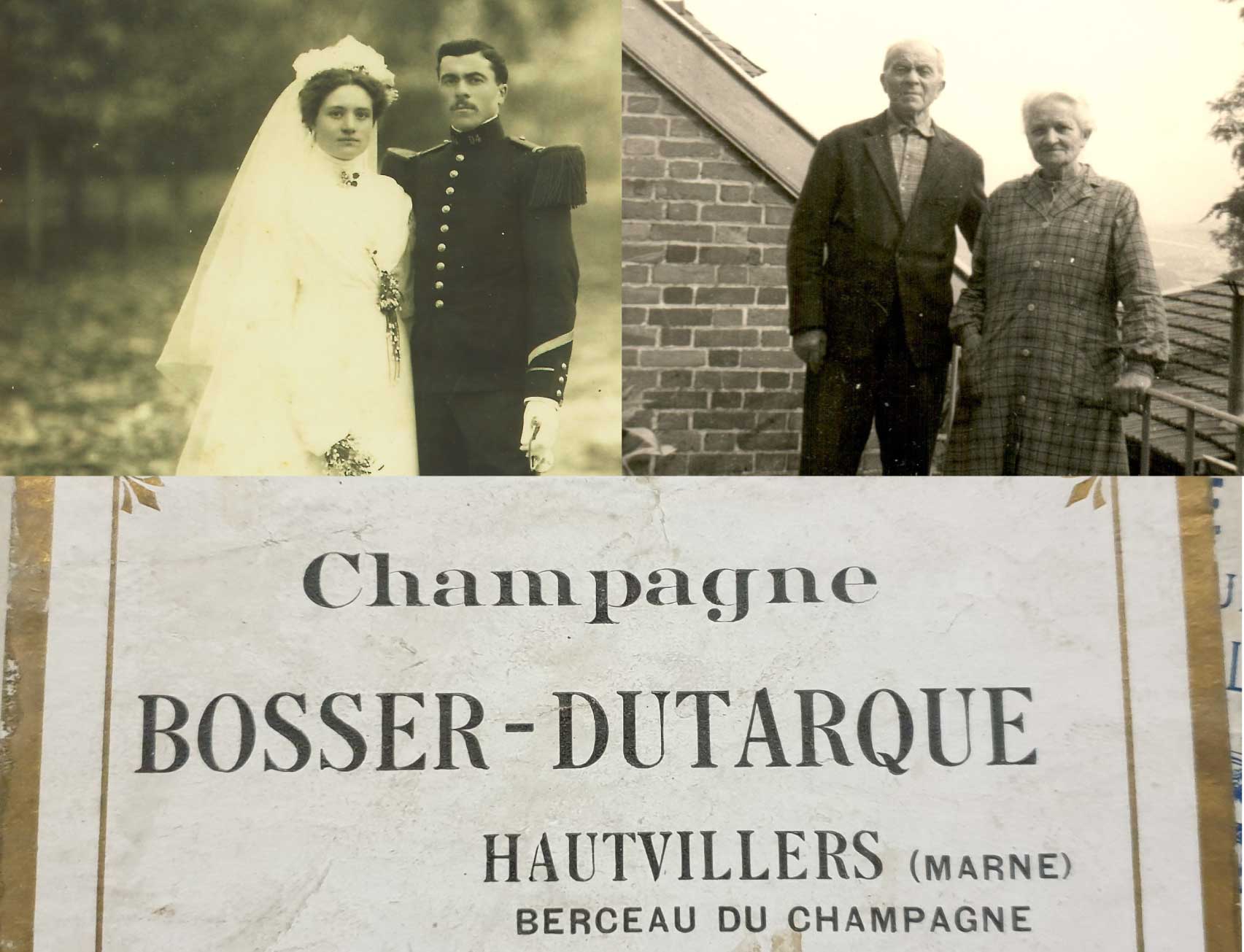 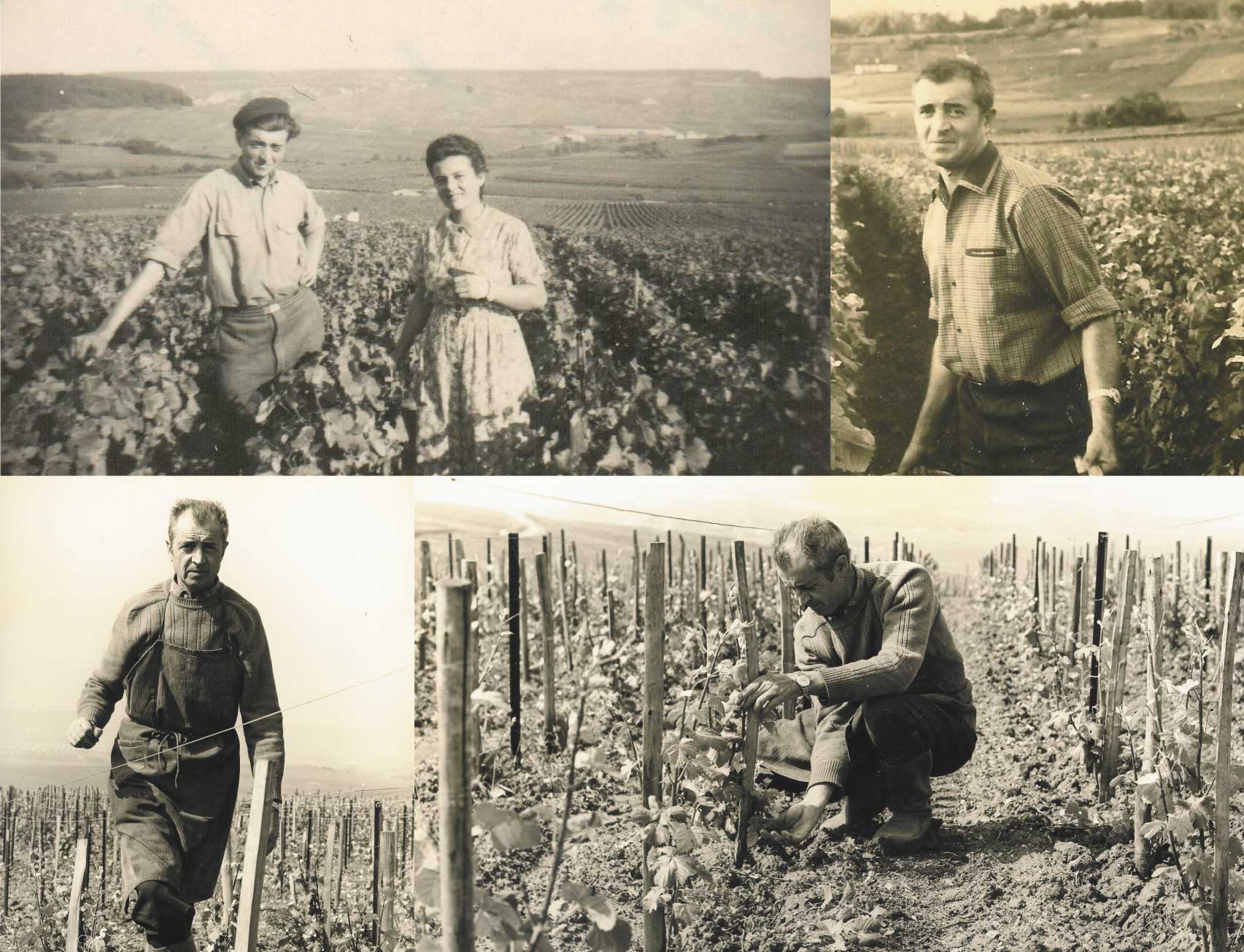 My grandfather Jean, son of Pierre and Suzanne, loves working in the vineyard and making wine. He perpetuates the family business, installs a press and a winery in order to control the pressing and vinification. With Thérèse, his wife, they market their champagne under the name Jean Bosser.

My father Jean-Philippe, one of the sons of Jean and Thérèse, has only one desire, to work in the vineyard and make his champagne. After studying viticulture and oenology, Jean-Philippe joined his parents in the family business. He had been working alongside them for several years when his father, Jean, died prematurely in 1977. Jean-Philippe was then just 30 years old and took over the family business.
With his wife, Huguette, they developed their vineyard and the sales, modernised the working tools and renamed their champagne under the name Jean-Philippe Bosser.
Since then, Jean-Philippe has been cultivating his vineyard with passion and know-how, respecting tradition to offer elegant and very fine champagnes.
My parents have always been keen to pass on the passion of their profession and know that the next generation of winemakers is assured. 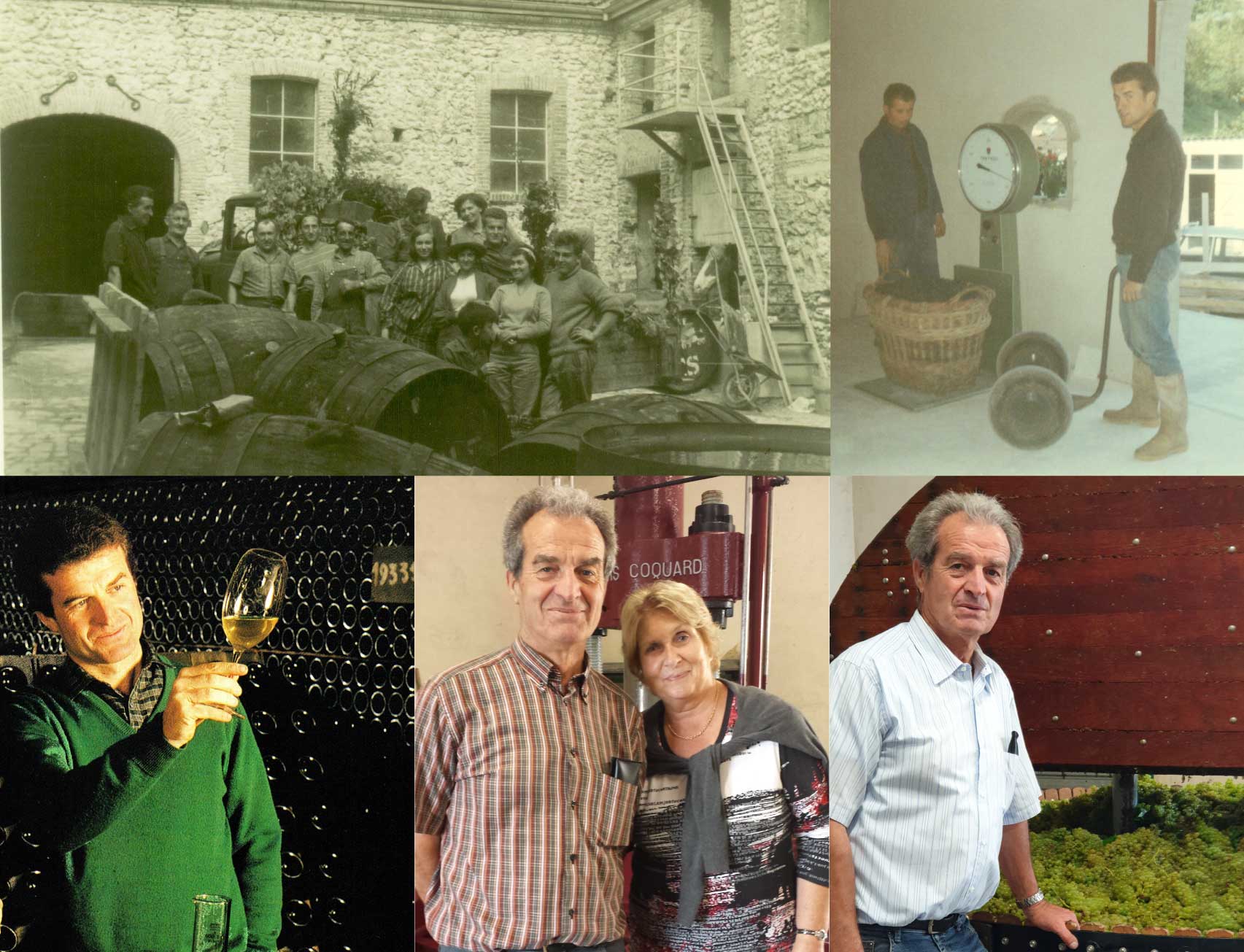 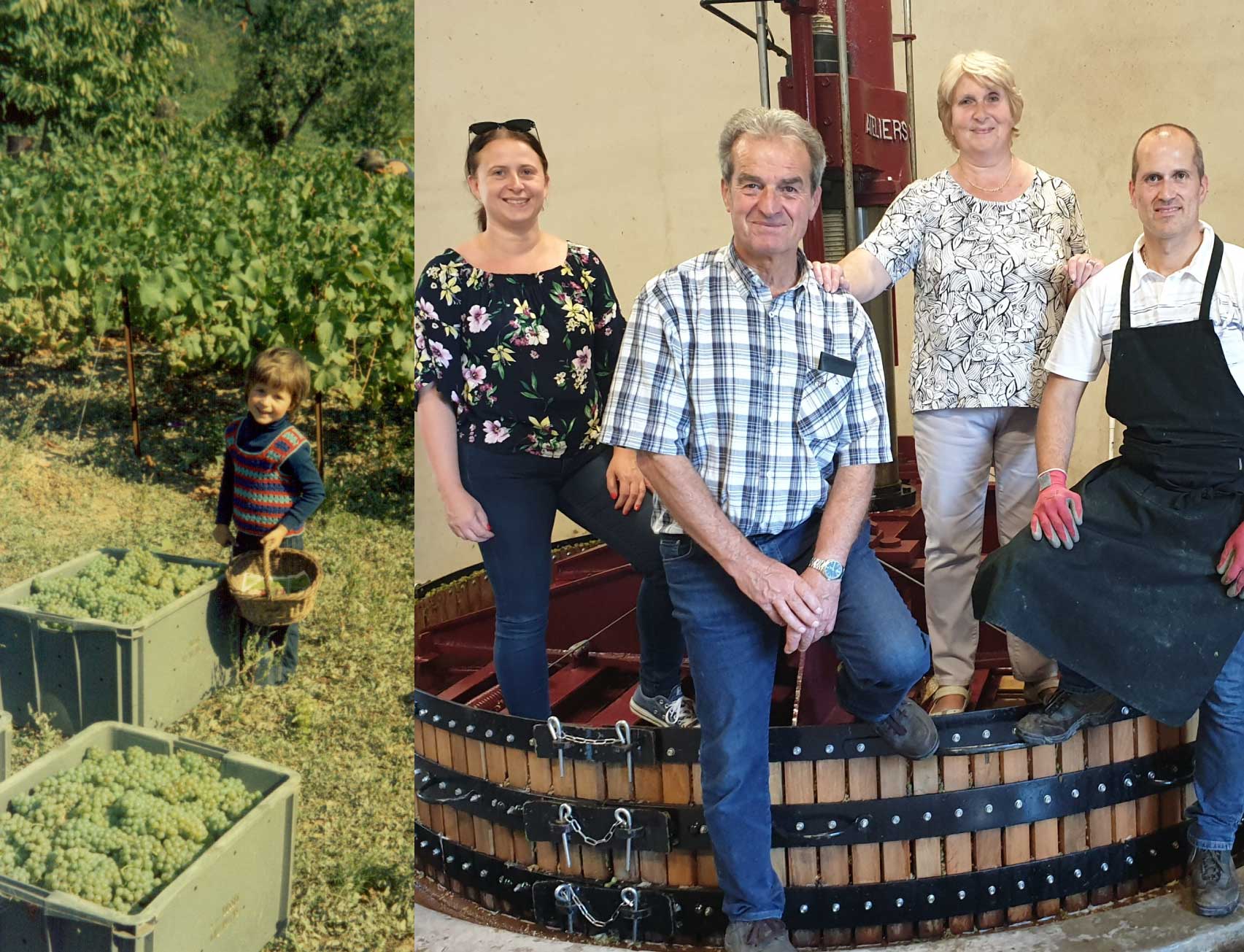 From now on, it is me, Christelle, 5th generation, who will take over to develop the image of the brand while keeping the spirit of a family business passed down from generation to generation.
This family heritage is part of my DNA, so it was obvious for me to pay homage to previous generations, to perpetuate a family tradition of more than a century and to continue to write its history. 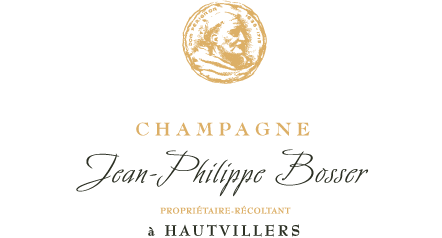